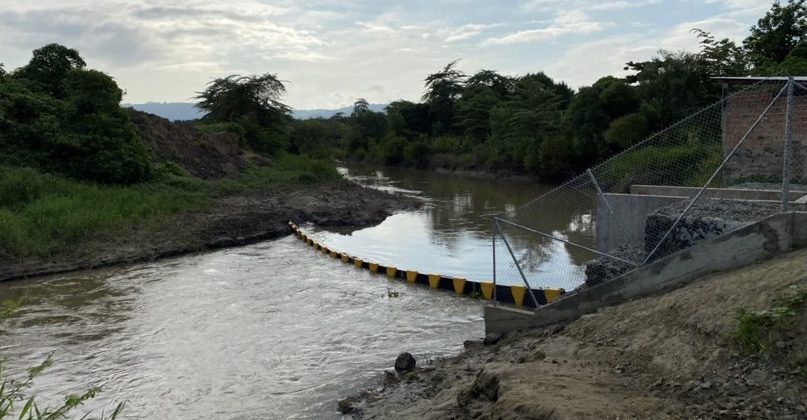 Bolina helps Ichthion deploy its Azure system in an Ecuadorian river in an effort to clean up massive amounts of plastic waste in a delicate and important ecosystem.

In April 2020, Ichthion, the award-winning UK-based developer of technologies to decrease plastic pollution in our oceans, was selected as one of the nine members of the Clean Currents Coalition (CCC) of the Benioff Ocean Initiative and the University of Santa Barbara, the first and largest global network of teams combating plastic waste in river systems around the world.

Born out of the laboratories of Imperial College London, Ichthion’s stated mandate is to overcome the limitations of existing technologies by delivering the first truly scalable solutions to reduce the flow of plastics into the world’s oceans. To do this, it proposes the deployment of energy-generative systems that can be installed in rivers, coastal areas, and the oceans to remove plastic waste and generate data.

Over the last three years, the start-up has been working on developing its technologies, filing patent applications, and signing a letter of intent with the government of Ecuador – a country that has a huge problem with plastic pollution, particularly in places like the Galápagos Islands, which is an area of huge ecological importance.

As part of this agreement with the Ecuadorian government, Ichthion has conducted a deep analysis of rivers in the country, following which it has decided to install its Azure system, a mobile conveyor belt to remove plastic debris together with booms engineered and supplied by Bolina, on the Portoviejo River, which empties into the Pacific Ocean, while transporting around 53% of the waste generated in the whole province.

Flowing over 100 kilometres, the Portoviejo River originates in the Santa Ana municipality and feeds the valley of the Manabí province, supplying water to more than 53% of its urban and rural population. The river also supports the Tumbes-Chocó-Magdalena biodiversity hotspot, which fosters mangrove and dry wood ecosystems. It is an important source of water and natural heritage and is a lifeline to some of the poorest communities in the country.

Further compounding the problem is that while waste collection coverage in urban areas reaches 90%, in rural areas it barely reaches 60%. Therefore, the common practice for communities that do not have access to waste collection is to dump all waste into the river, a practice that has considerably affected the Portoviejo River’s ecosystem and diminished its capacity to protect the flora, fauna, and human populations from the impact of climate change.

The Azure river system consists of Bolina’s MDB600 Modular Debris Booms. These booms were chosen due to the necessity for a flexible and durable solution. The booms move with the tidal range of the river, with intercepted material directed towards extraction points, while the aggregation of physical material is avoided. The boom is porous, preventing an upstream-downstream pressure imbalance, with a set pore diameter and density to trap even the smallest items of waste, such as cigarette filters and bottle tops.

In addition, the target depth of the boom allows for fluvial fauna to pass under it, while also minimising the number of microscopic organisms trapped in the boom. What’s more, the Azure system consists of a censoring system to classify and measure the recovered material, generating data that will enable more effective decision-making and evidence-based policymaking, which is why the project is being implemented under an alliance with the local provincial government.

Although the installation of the booms themselves was relatively straightforward and completed within one working day, the Ichthion team had a lack of experience when it came to using or installing this type of product, as well as dealing with the extreme river conditions that resulted in massive fluctuations in river depths between days. The Bolina team was however on hand to help during the installation process, having sent out detailed work instructions, along with comprehensive information covering the installation of the product.

Another challenge encountered by the Ichthion team was during the usage, issues arose related to the anchoring system. This was due to the unstable soil and the extreme changes in water depth – according to the available historical data, water depth changes only varied 2 metres between the wet and dry seasons. However, on the ground, it became apparent that there were variations of more than 4 metres in a matter of days.

These challenges were overcome thanks to a combination of teamwork and coordination between the Ichthion and Bolina teams, while the robustness of the system and booms helped to ensure the ongoing success of the project.

Once recovered material is collected, the plastics are separated and processed to become flakes, and then distributed for recycling. Optimising the collection of plastics and their value chain plays an important role in the project’s strategy, Ichthion says. In addition, the company says that it will also work with existing waste miner associations, where up to 75% are female recyclers, promoting financial inclusion.

Ichthion’s Azure system and the accompanying Bolina-supplied booms are crucial to the future health and wellbeing of the Manabí province.

With plastic pollution continuing to be a worldwide issue, effective solutions like the ones on offer from Ecocoast and Bolina could be a way to address the problem. With minimal maintenance required, and a robust design, our barriers offer governments, private companies and organisations the chance to clean up their water systems and revitalise their ecosystems and environments. Get in touch to know more!